Skip to content
Home 11Kara What is a FRAE Rating?

What is a FRAE Rating? When fly anglers talk about their fly rods, they use a set of terms to describe the rod. This usually includes the rod’s length and the rod’s weight. You’ll hear fly fisherman say they have a 7ft 3wt or a 9ft 5wt, etc. The rod’s weight has nothing to do with how much the fly rod actually weights, but rather is connected to the size of the fly line recommended to be used with that particular rod for proper load and casting. Generally speaking, if the rod is a 5wt, you’d use a 5wt fly line with it. Although you can size a fly line up or down by a single size for specific reasons or preferences, in most cases you use an 8wt fly line on an 8wt fly rod and match it directly. The larger the fish or fly used, typically the heavier the rating your fly rod should be. I would use a 3wt-5wt for most of my trout fishing, but would go with a heavier rod (thus heavier fly line), such as a 10wt-12wt if targeting GTs. So what about tenkara rods?

So what’s so important about where it flexes? 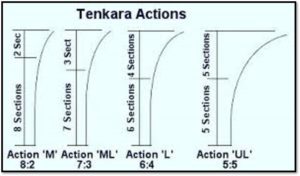 The flex point of a tenkara rod impacts how it casts and it’s action. A tenkara rod with a 5:5 flex will be softer and cast slower than a tenkara rod with a 7:3 flex which will be stiffer and require a faster cast. Thus, anglers talk about the action of their rods as being slow, mid-action, or fast. The action of a tenkara rod is not just about personal preference but also affects hook sets and the “backbone” of the rod which give it more or less fighting power. Of course, other factors influence this as well, primarily what material the tenkara rod is made from and its specs or its dimensions. But you can read more about that here.

At Zen we found ourselves constantly explaining this to interested anglers and people who came from a fly fishing background who understood what a rod weight inferred, but not a tenkara rod’s flex. So we decided to simplify things – because that’s what tenkara is all about, right!  We assigned Fly Rod Approximate Equivalency  (FRAE) Ratings to all our rods – and in doing so minimize confusion, are more user-friendly, and help bring the fly fishing world together under a unified language.  It is exact? No. It’s approximate and provides anglers an idea of rod capacity and functionality. The Zen FRAE Rating helps fly anglers understand what the rod can do and what type of fish it can handle. Does FRAE refer to line weight?

Somewhat. Usually tenkara anglers are using ultralight tenkara lines such as furled lines, tenkara floating lines or tenkara level lines. But at Zen we support experimentation, creativity and innovation…American Tenkara.  We’ve been designing Fusion Fly Lines for our tenkara rods – heavier more traditional fly lines blended with tenkara specific features to be cast on our tenkara rods. These are still in the prototype stage but are coming along nicely. Our Fusion Fly Lines are being designed to flatter the casting abilities of our rods for different situations including distance, fly size/weight, weather/wind and of course tenkara rod specs. In the meantime, our FRAE Rating gives anglers an approximate weight match for using regular fly line to achieve an ample cast within a fixed-line scenario. The biggest difference however, between a regular fly rod and a tenkara fly rod is the range of line sizes a single weight rod can cast. Most Zen Tenkara rods can cast a fairly broad range of line weights depending on where and how its being used. This is a BIG topic and will be reserved for another article. But the rule of thumb mentioned above for regular fly rods, generally applies to tenkara fly rods, then you size up or down for specific reasons, conditions or preferences which again can be reserved for a later article. The FRAE Rating gets you on the target, it’s up to you, to make the bull’s eye.

Hopefully now you understand what a FRAE Rating is, how it’s used and why we assign it to our tenkara rods. It’s not a direct translation but an approximate comparison to regular fly rods in order to help anglers understand the rod’s capacity, use, and line pairing matches – all in an effort to unit the fly fishing industry, help anglers speak the same language and to facilitate communication, appreciation, respect and understanding between each other and different fly fishing methods.