The Geometry of Landing Big Fish on a Reel or Tenkara Whenever I sit down or get together with a group of traditional fly anglers we inevitably get to  talking about tenkara. The number one question I get asked is, “What do you do when a fish runs?” My response has become a mini lesson of sorts, where we end up discussing fish fighting tactics on and off the reel, and what happens to the rod during these different, but similar, battles. I assure them, there’s no magic or mystery to the feat, it’s all the same fish geometry on a reel or on a tenkara rod.

Geometry? What? Are we back in high school?

Not quite but in case you missed class that day or fell asleep let do a very quick review. A triangle is a shape formed when three points are connected by straight lines and form three angles. Where these points are relative to each other, and the angles that are created when they are connect, determine the type of triangle that is formed. A fishing triangle is made each time we hook a fish. The angler represents the first point, the rod tip is the second point, and the fish is the third point. Draw a straight line between these points and you form a triangle. Every single time you hook a fish, you inadvertently create this shape. The type of triangle you form may change as the fish, your rod, or you move, but the triad is constant. Anglers are rarely conscious of this relationship – which is exactly the same with or without a reel.

This fishing triangle is rarely if ever mentioned, yet it’s key to everything concerning fish management. In fact, I believe the type of triangle you’re in at any given moment, when connected to a fish, directly determines the amount of control you have or don’t have over that fish. The type of triangle you are in determines if you’re able to steer and guide a fish, or whether you are simply holding on for dear life. Your fishing triangle often determines whether you’ll successfully land a fish, or lose it. It is All Knowing and generally, we are completely oblivious to it.

When you hook a fish, you almost instantly form a right triangle. The angle between your rod tip and the fish is about 90 degrees. This is a powerful position. Here, you’re engaging your whole rod and are able to apply solid, steady pressure. There’s no slack in the line, and you have control.

When the fish fights and begins to move as in a run, most anglers lower their rod tip and allow the fish to take line off the reel. When this happens, the angle that exists between your rod tip and the fish is reduced. The more the tip is lowered or the more it points directly at the fish, the less control you have. During a run, the angler isn’t able to steer or guide, he or she is simply holding on by the drag on the reel and the tension created by the fish pulling.

The moment the fish slows down or begins to tire however, this is the signal for the angler to start reeling and gradually begin to bring the rod tip up. This reestablishes the 90 degree angle. On bigger or more powerful species, this happens multiple times before the fish is landed:  Fish runs. Rod tip is lowered, and line is fed. Fish gets tired. Angler reels in line, rod tip is lifted. Each time the run is shorter until eventually, the fish is close enough to land.

During the landing you often see anglers attempting to exaggerate this angle by leaning way back to broaden the distance between rod tip and fish. They will go past 90 degrees to 115 or even 120 degrees, in order to keep tension on the line while reeling the fish in close. This happens whenever and wherever people land fish on fly rods and reels.

If you can imagine creating this right angle between the rod tip and fish, and then increasing or decreasing that angle by moving your rod tip away from or towards the fish, and you color code those different angles, you end up with a diagram like the ones below. 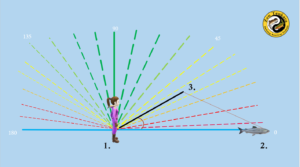 The green area is the Zone of Control, it’s where you can maneuver, steer and turn fish successfully. The yellow area is a Warning Zone. Yellow is where you need to be careful and deliberate about your play. The orange area is the Danger Zone. This is where only a combination of desperate measures and luck can fix things. The red area is the No Control Zone. On a reel, hold on tight and hope your drag is set properly. If you’re on a tenkara rod, you just lost the fish.

Keep in mind, these angles and zones exist regardless of the plane your rod is in. Whether you hold your rod vertically off the water, horizontally or somewhere in between, the triangle is still formed whenever you’re hooked up. The angles are the same, they just exist along a different plane. That 90 degree angle between rod tip and fish translates into control. Reduce that angle and you reduce your control. Angles between 60 and 120 degrees are the most effective fish management angles. Go past those points in either direction, and the ability to maneuverer  and steer a fish, is diminished.  On a reel, when a fish runs you are simply holding on and waiting until you can get back in control and into that right triangle again.

During these conversations about fly fishing and tenkara, I usually return their question, with my own question, “On a rod and reel, what if you can’t let the fish run? Say, there’s a downed log or tree, or a coral head nearby. What do you do in this situation?”

In this scenario you can’t feed line. You can’t allow the fish to run. If it does, it’ll reach the obstacle, break off on coral, tangle in the log. You’ll absolutely lose the fish. Think about it. You stop the line and use the fish’s own momentum to turn it away from the obstacle. Once the fish turns away, you flip your rod over “opposite the fish” to once again, establish about a  90 degree/right triangle between your rod tip and the fish.

This is exactly what tenkara anglers do – all the time, every time. They use the fish’s own momentum to steer and guide it, and always, always try to maintain a 90 degree angle from rod tip to fish. 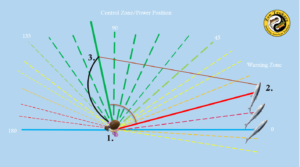 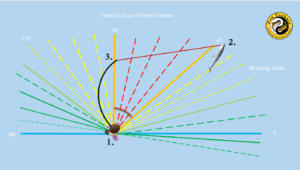 On a traditional setup those fishing triangle angles are less critical. If you lose control and the fish runs, reducing the angle, you rely on your reel and the tension of your drag system to stay connected.  On a tenkara rod, since you have no extra line to give, that can never happen.

Lowering a tenkara rod tip, allowing a tenkara rod to straighten, is a no-no. If your tenkara rod begins to straighten in the direction of the fish, if it goes past about 60 degrees, it’s highly unlikely you can recover from this position. The only chance you have at correcting it is to physically move your body forward, while simultaneously moving your rod backward. This rapid combination of movements is your only hope to close the gap and reestablish a right triangle, returning to the Zone of Control. A few swift steps forward with an exaggerated pulling back of the rod might, just might, work. It’s a Hail Mary move for sure.

Where the Head Goes the Body Follows

Steer and turn, guide and direct. Concentrate on maintaining even pressure while you maneuver to maintain a right triangle with the fish at all costs. Just don’t let your tenkara rod straighten or the angle go past 65 degrees. Then everything else will fall into place. In this position you’ll have control of and tension on, the fish’s head. The next time you’re on your fly rod and reel, try to practice the fishing triangle a bit. Focus on maintaining a right triangle with the fish. You may find the fish run less and you’re able to land quicker. Or simply pick up a tenkara rod to hone those skills even more.